Rare Plants Blog Tip of the Week – Focus on Anthuriums

Get some more love in your life!! 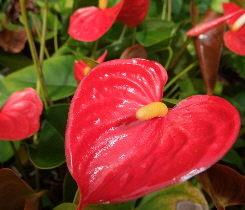 …..simply by equipping yourself with a place for Anthuriums. Anthuriums are known as Love Hearts because both the leaves and the flowers are shaped like a heart! Also called Flamingo Flower. Anthuriums are one of the worlds most popular flowers. Anthurium andraeanum is the most well known and loved ….but out there in nature are likely some 1500 species…many as yet undiscovered!!

Anthuriums are aroids being in the Family Araceae which is also known as the Arum Family. Aroids are fascinating plants but more about that later.  Anthuriums occur naturally from Mexico to Uraguay in South America.
Some of the Anthuriums  you may have heard of are: Anthurium andaeanum, A. hookeri, A. andicola, A. bakeri, A. coriaceum, A. crystallinum, A. scherzerianum, A. warocqueanum.  Well there are 1500 more with great variation in size, colour, leaf shape and flowering.
The varying life cycles are fascinating but all produce seed on an erect spadix and have  a broad spathe at the base of the spadix.
The vast majority grow as epiphytes on trees and rocks.
Although many beautiful species are grown in Asia and Hawaii they are only native to the Neotropics of Central and South America.
The Vast Majority of the most beautiful Anthurium species grow on the western slopes of the Andes Mountains in the Rainforests of Colombia and Equador.

Most Anthuriums grow high up….yes even the gigantic Birdsnest Forms…. in the fork of a tree where the breeze quickly dries its roots after rain. Keep this in mind as you train your Anthurium to grow in potting mix.

More than any other tropical plant, treat your anthuriums more  like an orchid. Your potting mix need not be as coarse as for orchids but you could use something like..:
55% Commercial well drained Potting Mix
35% coarse bark of diameter 10-15mm
10% Charcoal and/or BlueMetal.
You will kill your anthuriums in winter if they are wet and cold…they will suffer from root rot. In the subtropics & tropics can be grown in the garden. Elsewhere bring inside for winter. Grow under filtered light.

Get Updated for New Plants Coming On!

Rare Plants Blog Tip of the Week – Focus on Anthuriums