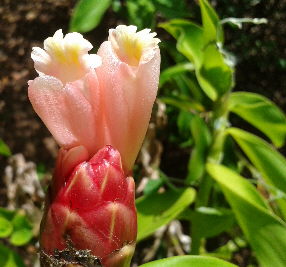 (2mAbcD) Costus spiralis unusual pink flowers that pop out of a bract at the heads of the plant in summer & autumn. The bract has red scales and these remain prominent with the pink flowers coming out from under the scales one by one. Likes a frostfree climate. In cooler climates they make a good pot speciman and can be taken indoors for winter. Full sun to full shade. 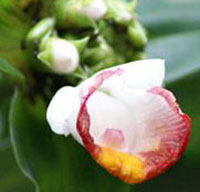 (2mAbcD) Costus lucanusiansus
A collectors Costus it has 2 white, pink and yellow flowers at a time from green bracts. From Africa. Attractive slightly curvy bright green foliage makes an attractive feature. Likes a well composted position and moisture. Most of the Gingers can be cut back prior to their spring flush when they reshoot vigorously off a strong rhizome. Will grow in warm temperate areas. Full sun to part shade. Sent in 75mm pots. 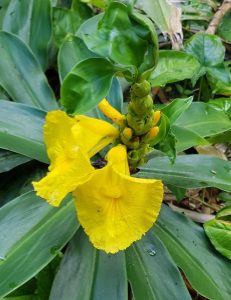 (2mAbcD) Costus subsessilis ‘Golden Yellow’. Brilliant big 100mm saucer shaped crinkled flowers that emerge from a green cone. The cone has lots of scales from which these amazing flowers emerge one or two at a time in summer. Likes a frostfree climate. In cooler climates they make a good pot speciman and can be taken indoors for winter. Full sun to light shade. 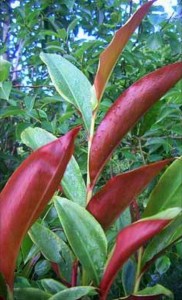 (1m*,**RfEdAbD) Alpinia caerulea from the rainforest understorys of Northern NSW and Southern QLD, it produces white and purple flowers and attractive long lasting blue fruit. It is a clumping upright plant with large interesting shiny red backed leaves. There are only 6 species of Alpinia native to Australia. Light to heavy shade.