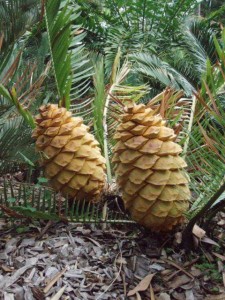 Cycads are some of the oldest plants still living on the planet tracing back to the ancient Mesezoic period some 170 million years ago!! Too tough for us but back in those hard to imagine days they were tasty food for the Dinosaurs walking the forests. There are only 347 living species in only 11 genera….. many of them rare and endangered or completely gone in their native habitat. Cycads are unrelated to any other living group of plants. Due to their rarity in the wild.. they are one of the most collectible valuable plants.

Cycads occur in most numbers on the continents of  Africa, Australia. New Guinea and South America but also occur in Central America, China, India Indonesia and the Caribbean Island, Madagascar & some Pacific Islands.

Is usually done sexually by seed but can also be done vegetatively from suckers or trunk offsets. Cycads do not bear flowers as their reproductive strucure is a cone. Cycads are strictly unisexual in that they either produce a male cone or a female cone never both. The seeds come from the female cone after being pollinated by pollen released from the male cone. Pollination needs to be aided by collecting the pollen and puffing it into the receptive female scales which open up when ready. It is usually assumed that the female is receptive when the male produces pollen!! In nature cycads are insect pollinated by very specific insects. Seeds will take from 6-24 months to germinate. Germination is expected when the seed radical elongates.

The amazing cones (or strobili) are an attracting feature of the Cycad and they are very variable. The female cone is usually much larger than the male but there are more male cones on a plant. The shapes do vary although the colour of the male and female are usually similar.

Usually hardy plants they do like good drainage and best to have a neutral or slightly acidic soil that is not saline. If you fertilise like any other plant your cycad can be relatively fast growing. Water well when its dry and hot..all are hardy but some hardier to dry conditions than others depending on their origins.