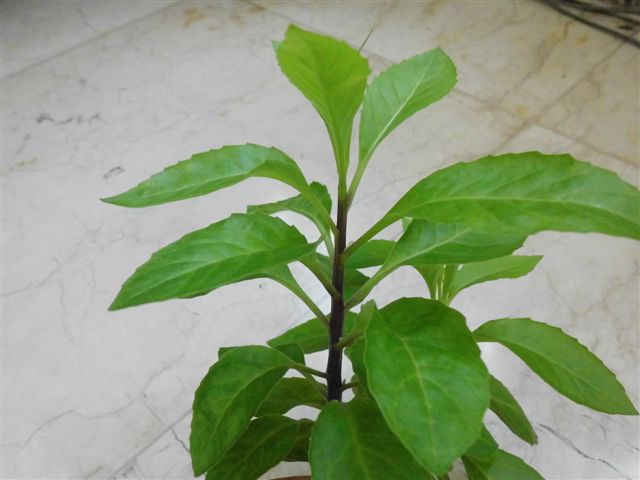 It is a hardy perennial, of the Asteraceae family to which daisies belong, and includes many plants useful to man, eg. German chamomile, echinacea, sunflower, calendula, dandelion and St. Mary’s thistle.
The plant is well known in South East Asia, with folklore medicinal uses in China, Indonesia, Malaysia and Thailand, and the leaves of the plant are also eaten as a vegetable. Leaves have a mild flavour (some people say far better than spinach as a vegetable, while others say the leaves taste like green beans) and can be used raw in salads, added to soups, stir-fries, casseroles, condiments and sauces, rice dishes and other savoury meals. And when growing very well, and leaves are in excess, feed some to laying hens, or grow some plants in a poultry forage system.
Sambung Leaves Many people just make it “a way of life” to eat 2-3 leaves a day, for the many benefits to health the plant may provide.
The herb has been noted for anti-viral, anti-inflammatory, anti-histamine, anti-pyretic, anti-oxidant, anti-cancer, anti-ageing, anti-allergy properties, and also actions as a blood cleanser, tonic, diuretic and pain killer Isabelle listed many human problems including male and female reproductive health that can be found on our Diabetes Plant page, Click this text to see the full list with more testimonials.
Many people from South East Asia know the herb as ‘life extender’. Fred who visited the Herb Farm asking for the Sambung plant to grow, told me of his aged aunt, who started taking Sambung daily since 1988 as she had been diagnosed with kidney and bladder cancer, and 20 years later Fred said, she is still alive and active; a ‘life extender’ for Fred’s aunt.

Sambung contains asparaginase. Asparaginase is an enzyme that has been found to lower levels of acrylamides in the body. Researchers say, acrylamides are seen as cancer causing substances, that are created when some foods are fried, baked, grilled or roasted. Acrylamides have also been found in foods, grown on mineral deleted soils. The addition of asparaginase to foods is one strategy to lower acrylamide levels in foods, and this is where Sambung comes in by eating a few leaves daily, we provide a natural source of asparaginase. Any herb, a natures remedy, that we can grow and use regularly for well-being, is most worthwhile.
Research has shown that it is an efficient regulator of blood sugar, and that the herb is also found to protect the kidneys, and also retinas, from damage caused by high blood sugar. It also lowers blood pressure, cholesterol and triglycerides, and has anti-inflammatory and antiviral action. Diabetics who use the herb have experienced very satisfying results in lowering glucose levels, and normalising the blood sugar.
Now for non-diabetics, it is said, the herb does not have this lowering glucose level affect, and it is interesting, that, non-diabetics are able to get the other therapeutic benefits of Sambung without the danger of having their blood sugar levels manipulated below normal levels.

2 Responses to “Tip of the Week – Focus on Diabetes Plant”